Professional life is untidiness. After a while, mostly, everyone realizes it’s about buttering, politics, hatred, fake smiles etc bits and pieces. It’s about learning the expressions and feelings like:  “I so much hate you”, “You are no friend of mine”, “Thank god, manager is on leave today”, “Good morning”, with a phony smile,  “Oh, we got to work this weekend!” etc. It’s about trying to find peace in the unwanted meetings. It’s about being part of meaningless discussions. It’s about doing a work just because manager says so. Something like this, all that and all that!

It’s the time where college WhatsApp groups go idle and you get added to work group where there is one with all juniors and one with all higher management. The forged emoticons, the sloppy forwards, some very theatrical leg pullings and in no time it becomes one boring dramatic monotone ride. Though we do not ask, they naturally flow in with ease.

Luckily, that’s not how my professional life started! I could only get to hear this from my working friends and experienced it years later when I had started my PhD and joined a work place for some stipends.  This post takes me back to my first working experiences.

After I finished my masters and joined back as a Professor, I looked like an alien among-st people who were already working there. I used to be idle sitting at my desk, with my associated works. This went on so for like two weeks. I used to join people at lunch, but it was mostly eating my box and boxing back to my chair. Those two weeks are the ones which I don’t remember anything else about. Because I was me, my works and you can call a boring version of me, which I did not like myself too.

Then slowly, as the conversations started, the staff room turned to a chatter box.  The lunch hours turned to a vegetable market. Our HOD had to split us into two different rooms when professors from other department complained that “your professors make a lot of noise”. “Fish market” it was, just like teachers in schools used to say!

I became known to be the idiotic one in the group, to talk all the nonsense. I knew at times, it would hurt people. But, I was like, “who cares?” They are friends and they will understand. And I am pretty sure that everyone in the group had the same feeling that they were the most idiotic one! May be we all were!

It is not that we were not engaging in our works. We did them to the mark. We used to assist each other, while at need to prepare for the class hours. There was no disturbance for the work life. Students never complained. They did complain about one thing that, “Our professors have more fun than students.” We used to feel good to go for outings when students had exams. We used to post those pictures on Facebook so that students feel a little Jealous. But they used to feel a lot jealous than what we had expected. So, we were happy!

The little birthday celebrations, the unplanned outings, the planned outings which usually went flop, the huge lunch time talks, teasing each other, the funny Facebook group conversations, discussing about “The Big Bang Theory” and the  “Vampire Diaries”,  class adjustments, talking about students, the “I will do that work”, the evening snacks, late evening campus roams, I guess we were more like students. Back again, for three long years. 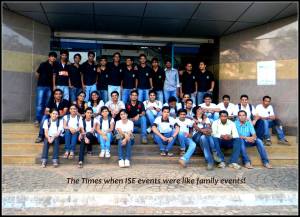 We never bothered for credit. We were equally happy for any one’s achievements. We did department events like a family event. There was no blame of work or complaint on any.  Going to work was like meeting another family. For a change, we were not colleagues, we were still friends. On one of our water fall trips, only on reaching we got to know that there was no water at all. We found a temple on the way and had our lunch. The whole trip was travelling. But trust me, it was the best trip we ever had in life. 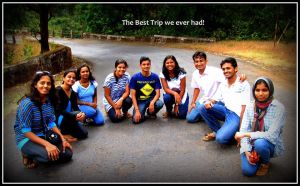 Though things changed a little with time, whatever went outside, our group still remained the same for all the time we spent there. You know, Cruel time. Then we all split out. Few got married, few moved to higher studies, few stayed there and that every possible things time gifts with. I know we might never have that kind of environment again. Like never. But those were the best 3 years and an awesome start to my professional life. Its’ all ancient now! But the memories have turned to priceless antiques. The traces give tears and smiles at the same time.

I dedicate this post to our group. We have so many memories that we could talk for next three years on what we did in those three years. Okay, we don’t have a name for our group. We were just a bunch of modern people behaving like stone aged ones. I am not going to thank any of them. Because we are still in touch and will be through (Yawn, we now discuss family issues and matters. LOL.). And here goes a scare crow for this post!

40 thoughts on “The Memory Shop”