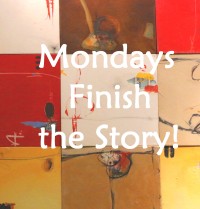 This story is written for Mondays Finish the Story: March 16, 2015. The task is, a photograph and a beginning line is given and the story needs to be completed in about 150 words.

A body suddenly crashed through a plate glass window at the Brigadier’s house. Disturbed were the people around who were busy in their daily chores. For a minute they were all looking intently at each other, not realizing how to seize the situation. They called all the maids and watch keepers and the entire mansion heard a creepy silence. It was cold.

The little yellow bird which had crashed in almost looked dead. It seemed that it was chased by an eagle. One of the maids ran down the mansion and got some mud from the garden. She gently applied it on the bird’s body which had a thin scar. Drops of water through the bird’s beak were delivered slowly.

Five minutes, it flapped its wings slowly, took a huge round in the hall and flew away through the window. Everyone smiled and the maid was rewarded.

You can read the stories written by others here by clicking on the blue fellow:

18 thoughts on “Maid and The Mansion”